We are happy to be able to talk about a new style of LED Grow Light; Electric Sky by The Green Sunshine Company is a truly a unique Led grow light in a crowd of similar technologies. It isn’t often that a new technology comes online that disrupts the marketplace and that’s just what the Electric Sky does through its development and use of “wide-band” LEDs. Electric Sky uses a patent-pending GS1 wideband spectrum technology to give your plants more of what they need to grow and thrive. The addition of these extra light spectrum’s is like “putting your cannabis plants on steroids” providing the power to increase yields and THC concentrations.

The secret is near-infared light that activates the “Emerson Effect” in plants, combined with photomorphogenic changes in the leaf, so that leaves get bigger and capture more light.

So is it worth the price? What’s the difference between these lights and other grow lights?

For the serious high yield cash cropper, these not-so-cheap LED grow lights will pay for themselves and more in a short time. If you can spare the cash, go for it. 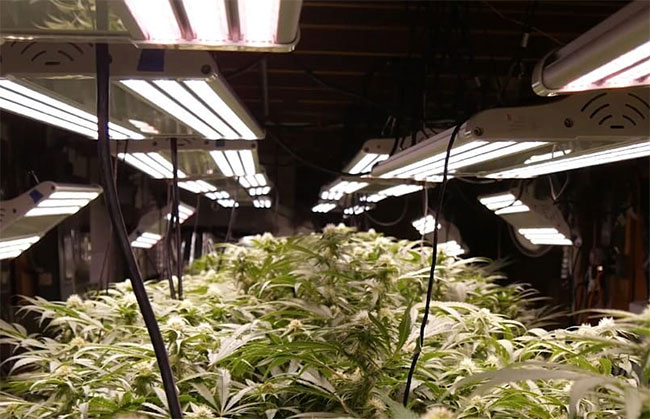 A key difference between the Electric Sky LED and other grow lights is the lenses. The ES300 uses unique linear lenses (instead of circular) combined with a distributed LED layout to shine light efficently into even the deep corners of your grow room.

The Green Sunshine Company making just one type in two different sizes. They use one spectrum profile called the GS-1 spectra, and it’s the same spectrum throughout all of their lights. They have two different sizes: the Electric Sky 180 and the Electric Sky ES300 LED. The Electric Sky 180 is about a two-foot wide unit. It covers a 2-x-4 area, and this smaller unit designed for home growers. And then ES300 is the commercial-level unit. It’s a little bit longer, has more diodes, has greater efficiency, and the newest model has a fully dimmable feature. Green Sunshine Company has tried to keep all of their lights affordable for the grower, because they know the importance of keeping costs down. 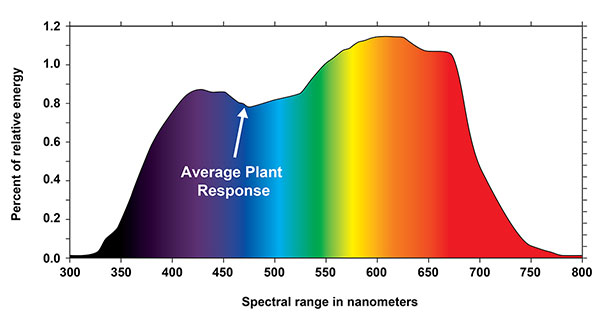 The PAR spectral region runs from 400 to 700 nanometers. This is the light that plants use to grow. The graph above represents a plant’s response to one color at a time. E.g. this graph was created by flashing a plant with blue (400nm) and taking a measurement. Flashing a plant with blue again but (401nm) and taking a measurement. 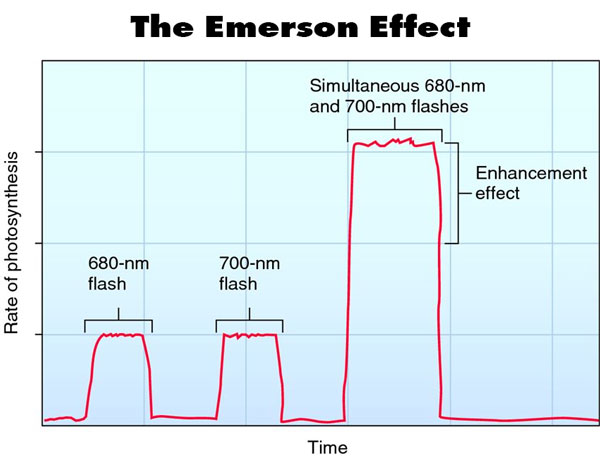 The secret that Emerson found is that colors have a symbiotic effect when a plant experiences both, so the “PAR” graph is just a general idea of a colors effectiveness, plants look for more than one color which is why they love a full spectrum of light.

What Mr. Emerson discovered is that plants would increase their rate of photosynthesis (grow faster) while exposed to different wavelengths of light simultaneously- one at 680 nm (deep red spectrum) and another at approximately 700 nm (far red, near-infrared) (wiki). But this growth increase was only present when both the red and far red, near-infrared wavelengths were combined. 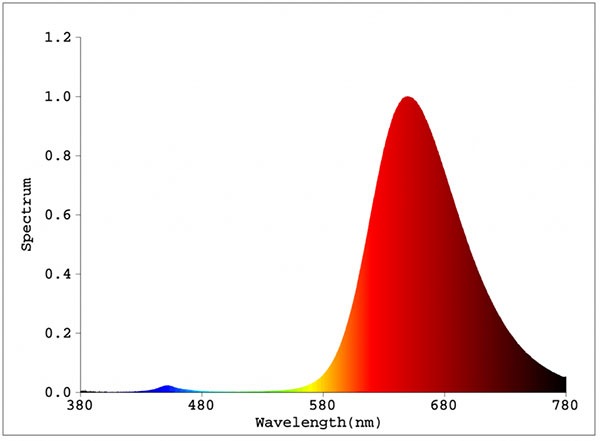 Electric Sky LED Grow Lights utilize the Emerson Effect with red wideband diodes (along with others) in a special spectrum optimized for plant performance.

The Old Way of Thinking about LED Grow Lights

In the early days of LED grow lights, it was thought that plants only really needed red and blue light to grow. It’s because of this that many of the LED Grow lights that you see always look purple in light color. In reality, cannabis leaves are absorbing much more than red and blue light. The fact is that the leaves of your plants are processing green and yellow light in the 500-600nm range. The chloroplasts which drive photosynthesis are using green, yellow and orange light as well to fully operate at peak performance.

It was thought in the past that green light is reflected off the leaves, but it is absorbed and used to produce energy within your plants. The wideband LEDs used in the Electric Sky produce a significant level of red spectrum and infrared light which many other LEDs lack; these spectrums are vital to healthy vegetation.

Why is the Electric Sky Different?

The wide spectrum LEDs are the first point of difference in this LED grow light unit. These wide bands provide your cannabis plants with more usable light then any other LED brand on the market. The Electric Sky doesn’t rely on just 8 to 12 spectrums of light like its competitors. It fills in the missing light spectrums other LEDs neglect.

Older LED grow lights have difficulty penetrating the canopy of your cannabis plants to provide light to the lower plant leaves. The Wideband technology improves purple and white LEDs as well as red and infrared LEDs which allow for better penetration and light uptake in your cannabis plants.

The Electric sky also uses “top bin mid power wideband diodes” which means the quality of the LEDs used are the top of the quality scale. With a life expectancy of over 60,000 hours, you’ll get your money out of these units fast between the number of grows you can have and with the amount of electricity you’ll save over using old-fashioned HPS or HID lights.

When you look at an Electric Sky Led Grow Light the first thing you will notice is the long linear lenses that stretch across the entire light panel. These lenses are designed to mimic natural light from the sky by diffusing the light rather than using a single source of light like traditional LED panels. The other goal of the linear lenses is to manipulate the light by projecting it out and down rather than all down like a single point LED grow light would provide.

With many grow lights on the market the actual growing footprint can be very different. For example, round LED units to produce around light pattern of dissipation where most of the intensity emanates from the center of the led panel and then falls off the farther from the center of the unit you get. The Electric sky has a must larger sweet spot and the light falls off in a regular rectangular shape which means there is much more usable light.

The Electric Sky by The Green Sunshine Company currently produced the Electric Sky ES180 and the ES300. Two ES300 units in tandem will produce the same energy as a 1000-Watt HPS light. 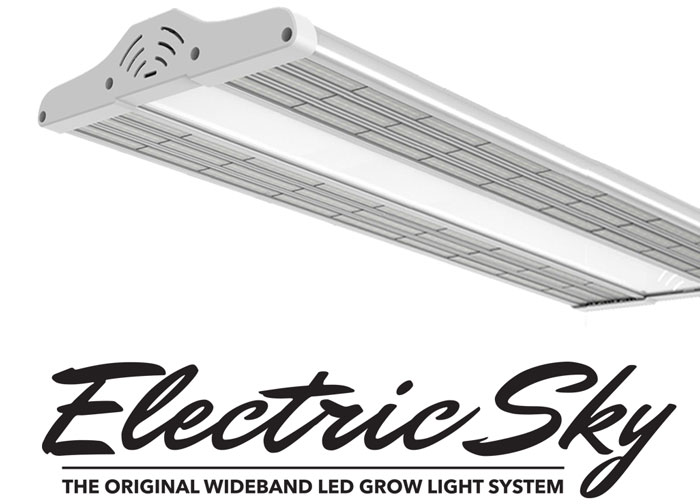 What do Electric Sky customers say?

The ES 300 LEDs are impressive and they surpassed my expectations. These LEDs are well crafted, built with high quality material, and are beautiful; plus, they are certainly worth the listed price. Plants respond really well to them too; my plants absolutely love them and I’ve never seen them happier. You definitely get what you’re paying for. I was most impressed with my first harvest. I honestly wish I purchased them sooner. So far, I prefer them over my HID lights, and I’m planning to replace all my HID lights with these LED’s in the near future. These lights are perfect for tents, and in my opinion the better option. Moreover, The Green Sunshine Company has excellent customer service, and they respond promptly to any questions or concerns. It’s been a pleasure doing business with them.

These lights really do some hard work. I have 2 and the newer one I received recently now comes with a dimmer switch. This is a very nice addition for those who want to be able to dim the lights. You can even hook 2 lights to 1 dimmer with the included extension and adapter. When the time comes for more lights I will be buying more. Great Job Dan!

Shipping was super fast. You can tell it is built right,with good quality parts. I just started using this light so i will update after a few months but I have been using led’s for about 4 years and this light is super bright(protect your eyes) with in days of switching to this light my plants have taken off.

This is amazing indoor grow light. I use to have HID and it was making crazy hot inside. After I start to use Sky ES300 , temperature is perfect and plants never get burn. I recommend it. Little expensive but deserves it.